In many parts of the world, demolition of old, decayed buildings continues to offer up surprises. In ancient cities such as Rome, even to scratch the surface often reveals a horde of historical artifacts.

And in most cities, these days, any sort of archeological site bears further investigation as well as preservation. This, of course, does not go well with the developers to whom every hour of delay is costly.

In cities like London, New York, and Paris, subways (or undergrounds) came into being before environmentalists realized the possible damage to historical treasures that might lie beneath the city streets.

But by the time Rome began excavating for subways, all this had changed. This explains why the Roman subway system is relatively small compared to that of other cities.

However, while the demolishment of many of today’s relatively modern buildings may not reveal priceless artifacts from the past, they can, and often do open up interesting windows into the past.

Only recently the 1960s tower block, the site of the Menzies Hotel at Wynyard gave not only the workers but the general public as well, quite a historic surprise.

Hidden away for over fifty years, workers uncovered the (at the time) state-of-the-art advertising façade of gentlemen’s department store known as Peapes. 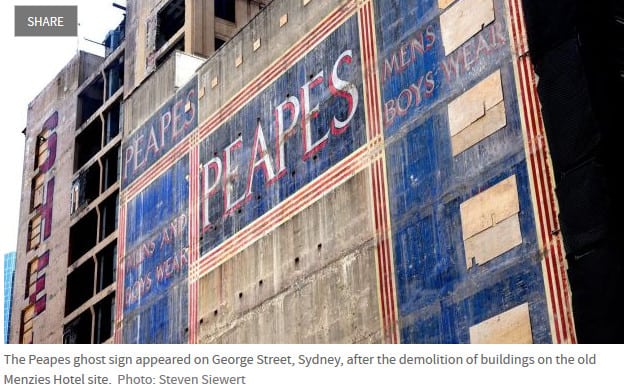 Once the demolition of buildings on the site of the former Menzies Hotel had cleared away some of the débris, the Peapes sign re-appeared on George Street in Sydney.

The building known as the Beneficial House is indeed listed in the heritage books, which also encompasses the sign and a part of the interior.

Unfortunately, however, the construction of the new tower next door at the Wynyard Station means that the site will soon be lost to view once again.

City historian, Lisa Murray said that while normally such signage is usually quite ephemeral, but the Peapes sign, due to its protected environment over all the years, continues to retain most of its original vibrant colors and “it’s simply a pleasure to see”.

At the time, she added, Peapes Gentlemen’s Clothing Store must have been a landmark on George Street.

The men’s clothing store lasted from 1866 to 1970 when it finally discontinued business and the building was converted into commercial offices.

The developers, mindful of the historical value of such finds, had the site and the sign carefully photographed. Later this will be delivered to the City of Sydney to form a part of the city’s archives.

In her book, author V. Murray writes that while people may not notice every ghost sign they pass, this Peapes sign has remained so bright and fresh that it’s hard to ignore.

But still, there are other good examples to be seen. John Walder, a tentmaker’s sign still exists. A restored Bushells Tea sign and o Pitt Street you can find the Rex Simpson Fine Clothes for Men.

Her advice is to get off that mobile phone and look up.

NBG Landscapes is a full service pool landscaping Sydney company. Please reach out to our Sydney landscapers for a free consultation on your next landscaping project.

Reasons to Study in Sydney